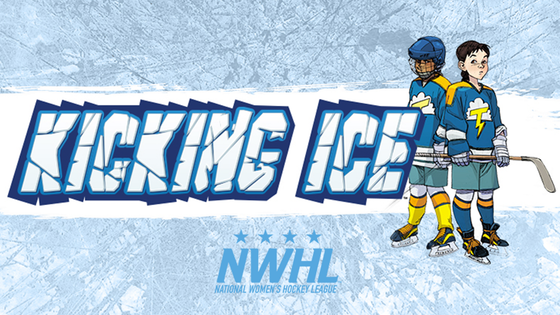 Kicking Ice is about two young, female hockey players, Bella and Skye, learning to play hockey and dreaming of one day playing in the National Women’s Hockey League (NWHL). Unfortunately, Bella and Skye deal with bullies who think that playing hockey isn’t for girls. Of course, Bella and Skye prove that kicking ice isn’t just for boys. This project is a celebration of women in sports and the amazing progress of the many pioneers who are helping to make professional women's hockey a reality.

Latest Updates from Our Project:

We are excited to announce that tomorrow night at 5:00PM ET we will be hosting a special live event with Connecticut Whale forward, Sophia Agostinelli. Sophia will join the Kicking Ice creative team to answer your questions about all things CT Whale and NWHL.

Sophia, a center with the Whale, was drafted in 2017 following her time playing for the  Hannover Lady Scorpions in Germany. Sophia is also a hockey and lacrosse coach who played Division I lacrosse for the College of the Holy Cross. We are honored to have Sophia joining us live tomorrow night to talk hockey and comics.

To tune into this event, simply go to the Kicking Ice Kickstarter homepage. The live video will stream from there and you are welcome to participate by posting comments and questions for Sophia and the Kicking Ice team. You are also welcome to send us your questions ahead of time through our Facebook or Twitter pages (@KickingIce).

We look forward to answering your questions tomorrow night!

Since we have hit the 25K mark that means we have a mystery stretch goal to reveal!

Our mystery stretch goal will include an added section to ALL books that features articles and essays about the history of women’s hockey. This section is a collaboration between writers who have been helping put women’s hockey on the map, such as Hannah Bevis, Erica Ayala, Mike Murphy, and more! From the US Women’s National Team, to the National Women’s Hockey League, the Canadian Women’s Hockey League, and college hockey, we plan to give you a look at how the sport has grown. The passionate and talented writers behind many well-known media outlets are working to bring you engaging and informative content. Whether you are new to women’s hockey or a long-time fan, we plan to have something for everyone.

This bonus content will also come with concept art from Kicking Ice and a sketchbook from our Kicking Ice artist that will show off how a comic page is created from script to final product. We even have some cool guest artists making contributions to the art section, such as Matt Waite and his tribute to the US Women's National Team and their gold medal at the 2018 Olympics.

As we solidify the list of contributing writers, we will keep you all updated! We are so excited to add even more awesome content to each book. Thank you for your continued support. Let’s keep kicking ice to hit this stretch goal!

Our community is now over 500 backers strong! That's the most kick ice news I could think of.

We now have more backers than the number of Dalmatians in that one Disney movie.

More backers than the number of red balloons in that catchy German song.

More backers than the amount of problems JAY-Z has.

More backers than the number of Fast and Furious movies (surprisingly).

More backers than... OK. You get. 500 is a LOT. We are thrilled at how quickly the Kicking Ice community is growing. We can't thank you all enough for your continued support with this project.

P.S. Team USA faces Canada for the gold medal on Wednesday! Follow us on Twitter at @kickingIce for live game updates and more gifs than you really want.